On my recent trip to the British Museum I saw a great many objects and these were certainly novel. They are baby feeders which date to 300-320 BCE from Sicily. Perhaps not something unusual until you consider the design. Rats.

In fairness there wasn’t much of a difference made between mice and rats at this point. Also there may not have been the negative associations with them, instead they could have been seen by children as cute or at least an animal they had daily experiences of. 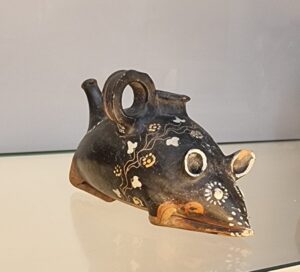 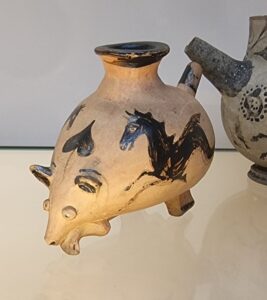 As you can see the detail is quite something. The baby feeder on the left had a ring handle, both have a strainer on the top with the tail acting as the spout.

Here’s a video of them.

An interesting aside on mice is found in a comment by Pliny the Elder.

“When a building is about to fall down, all the mice desert it” (NH.VIII.42)

This may be the origin for the modern day term ‘rats deserting a sinking ship’.