The Saturnalia was a festival which began around the 17th of December, many of its elements (partying and gifts) have been linked to events of December in the modern day. But what went on exactly?

The main character involved in all of this was the god Saturn, primarily an agricultural deity, but with one key association that ran throughout the Saturnalia. According to myth he presided during the Golden Age, an era in which all people were equal and times were good. This notion of equality manifested itself in one of the most famous aspects, slaves being given their freedom. But as I’ll point out, this may not have been as it seemed.

The original Saturnalia was dated by Livy to when Saturn had his temple dedicated, around 497 BCE[1]. It was an old festival but how it originally manifested is lost to us. In fact, we lack any overriding description of the Saturnalia, even in the Imperial period. What we are left with are accounts, quips, complaints and commentary which begins (as with much of Rome’s history) in the centuries leading up to the Imperial period.

That said not all is lost – the opening ceremony of the festival was a sacrifice to Saturn at his temple. It’s relatively safe to assume that this was how the festival had always started. Even so there were later tweaks, Cato the Elder was said to have made a comment about a Greek element being added to it, presumably the non-Roman practise of the priests making the sacrifice with their heads uncovered. The early Saturnalia may have been a relatively simple affair; a sacrifice, feast and some form of temporary liberation for the slaves. But in 217 BCE a new element was added – the lectisternium. 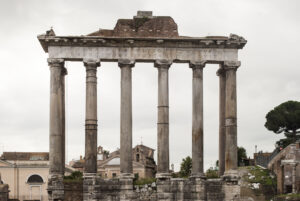 The temple of Saturn in Rome.

The lectisternium was a ritual where images of selected gods (most likely wooden votive images) were placed on a couch which was brought to the feast. This wasn’t a standard Roman rite and Livy states that it was first undertaken in 399 BCE[2]. At this time Rome had been suffering a great pestilence and, as it occasionally did, Rome consulted the Sybilline books which advised that this was the required rite. Exactly where the lectisternium originated from isn’t clear, perhaps Etruscan or Greek. In either case it’s an interesting insight into how Rome did import what were essentially foreign customs on occasion. Rome might have been a place of brick and marble, but it was flexible too.

The Saturnalia and the lectisternium didn’t cross paths till 217 BCE, again it’s Livy[3] who states that this was when the festival started to acquire a form which became a template for later years.  It was at this point when a great disaster had befallen Rome, which needed only the kind of gratification that the lectisternium could provide. For those familiar with this period the name ‘Hannibal’ is hard to avoid, yet it doesn’t seem to have been in response to the Carthaginian’s arrival in Italy and victory at the Trebia. Or at least not directly.

Instead it was due to the new Roman consul, Flaminius, leaving Rome to take charge of the army without performing the proper rites. Livy paints a scene of moral panic at Rome as a result of this. In addition many ill portents and omens were noted. The gods, it seemed, were not happy.

The lectisternium, now added, became a central feature of the Saturnalia. It was the public feast and the public face of the festival. But after this things moved from the public to the private.

In contrast to the somewhat bawdy festival in the forum, on the streets or wherever they took place in the towns and villages (it wasn’t just celebrated at Rome), were the equally bawdy celebrations in the domus or villa. Here we might imagine a very tailored response to the festival and depending on the resources you had the Saturnalia might be a big banquet at a grand villa, or a much smaller affair. But there were central features which both shared.

One feature, which seems the most dangerous by its nature, was the equality afforded to slaves. For a period of time (and again, the festival was lengthened and shortened at various points[4]) a slave could speak to his or her master as an equal. For some this was an important social valve, it performed a needed respite for the large numbers of slaves. But to what extent was this the case? Could a slave really consider themselves equal and were there consequences for speaking too freely?

One fascinating character suggests that yes, you needed to watch your tongue. Epicetus, a slave who was freed, wrote that masters would always remember who had said what and that there could be repercussions[5]. Reference to the Saturnalia and the cry ‘Io Saturnalia’ became a byword for getting above your station, the impudent slave in Petronius’ Satyricon was asked whether it was December yet. When Narcissus, the Emperor Claudius’ freedman, instructed some troops the soldiers barked back ‘Io Saturnalia’ at him.

Getting back to the practicality of slavery and freedom, surely not all slaves could have been freed? Imagine a wealthy family hosting a feast for their friends, who would do the cooking, the serving and the basic functions of the house? The slaves were the infrastructure which supported such festivities.

Perhaps then the freeing of slaves was dependent on the situation. A small house with a few slaves might have been able to facilitate this ideal. A larger house may have allowed a select few slaves to celebrate, possibly as reward for good behaviour. For slaves on farms and in the country it could be as easy as giving them a holiday of sorts and Cato even suggested the amount of wine for each slave in this respect (each was allowed 3.5 litres)[6].

The behaviour of the slaves and perhaps the guests wasn’t always appreciated. Seneca, Plutarch and Pliny all complained about the excess noise and merriment, with Pliny literally shutting himself off from it all and confining himself in a small room[7].

Guests at a party ditched the formal outfits for colourful ones along with the red felt cap. Gambling and games were played along with the necessary drinking. Yet it may not have been a complete free-for-all. Roman women may have only stayed for the initial celebrations before departing for their own quarters, perhaps with other Roman woman who had come to the party.  It seems that even in the most equal of celebrations both slaves and women had their equality protected.

Two elements of the Saturnalia which are linked to the modern day are the gifts and the bizarre notion of the King, often linked to the Lord of Misrule. The King of Saturnalia may have been a later addition which boosted that key part of the festival, challenging social order. The King, selected by lot or the roll of a dice, could make a request or directly order someone at the party to do something. That chance had a part to play referred back to the motif of equality, after all a redeemed slave or master of the house had as equal a chance in being selected. Here was another manifestation of the Saturnalia as a festival where social order was challenged and teased with.

Tacitus recorded a very eventful instance of the King in relation to a young Nero[8]. The historian wrote that Nero and Britannicus, his step brother, both rolled dice to see who would be King and Nero won. His first act was to order Britannicus to sing in front of everyone, hoping they’d mock him. However, Britannicus’ performance endeared him to the crowd and this wasn’t well received by Nero. Britannicus mysteriously died a short time after.

The exchange of gifts probably took place earlier on before the party took hold and this activity brought with it a range of experience and responses which are common in the modern day. Augustus displayed a mischievous approach when giving people their gifts[9], perhaps this is easier when you are the Emperor. Martial, writing in the 1st century BCE, is a fantastic resource for all sorts of gifting issues. He complained about cheap gifts, the dilemma over what to get people and listed a number of options. This ranged from slaves, exercise equipment, artwork or furniture. In fact most things you can think of. The Saturnalia’s association with gifts could even be used as an excuse in court. When Julius Bassus was accused of receiving gifts (possibly bribes) Pliny defended him by pointing out that these had been received during the Saturnalia. Rome wouldn’t be Rome if politics weren’t involved somewhere.

“These presents I’d put at thirty sesterces the lot…how much more conveniently with no bother, could one boy have popped round with five pounds of silverware”

The Saturnalia was a fascinating event. I think of it akin to how New Year’s Eve is celebrated (or was), you can go big or have a smaller celebration. Or none at all. I can’t imagine any two being the same for any household or guest. Through it we are offered an unique perspective on how Rome incorporated new ideas and handled social tensions.

In case you wanted to listen – here’s my episode on it!