The Fezzan is an area of approximately 212,000 square miles of unforgiving desert and valleys. Situated in the south west of modern day Libya it’s not an area you’d easily traverse, let alone live in. Yet in the 1st millennium BCE a people did exactly that. They created art, irrigated the baked earth and sustained a culture.

One of the earliest surviving references to the Garamantes is found in Herodotus’ Histories, written in the 5th century BCE[1]. Herodotus’ description was contradictory, they had no weapons, but they hunted a cave dwelling tribe nearby using chariots. He also went on to add other details, which almost border on the absurd. They have cattle which walk backwards due to long horns, farmed using soil laid on top of salt and refused sleep with men. It’s less an exact account and more a rattling of unconnected trivia. 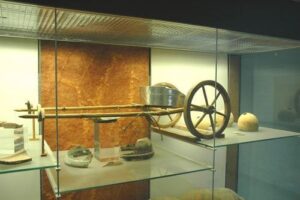 Reconstruction of a Garamantian chariot.

However, this is often the style of Herodotus and it’s as charming as it is infuriating. It’s made more so because he can hide the truth in a lie, exaggeration or even a mistranslation. His report of giant ants in India which dug gold were given credibility when it was revealed that marmots on the Dansor plain dug their burrows and would sometimes churn up gold dust which the locals collected.

Herodotus’ description may have had more truth to it than at first believed, and one vital invention can be linked to this.

The Garamantes initially inhabited a hilltop capital called Zinchera, which looked out over the Wadi Al-Ajal valley. The earliest dating for this is 900 BCE and up until the 1st century CE it offered a well defended position if needed. Activity in the valley increased with the later capital, Garama, being built in the 4th century BCE and this later became the capital.

The rise of the Garamantes came in the latter few centuries of the first millenium BCE and is linked to a technology which changed everything.

In the early 1st millenium BCE a type of well was developed in Persia called the qanat. This technology spread west and became known by the word ‘foggara’. These were a series of vertical shafts dug in a line (see image). The foggara was a perfect solution for the Garamantes who could now access the vast amounts of fossilised water in the bedrock below. 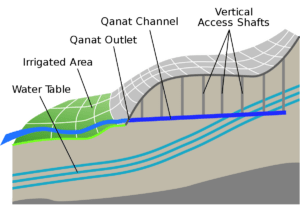 It was hard work and required large amounts of manpower. Here we might link in with Herodotus’ comment on the cave dweller peoples who were hunted. Perhaps these weren’t caught to sell as slaves but were used to dig the foggara complex which grew and grew. Aerial photography across a 106 km stretch of land revealed approximately 530 foggaras (100 of these had tributary branches)[2]. It was a huge engineering feat. The dating of the foggaras is debated, it’s certain that they were in use by 400 CE. The earliest date of their construction is thought to be around the 2nd and 1st centuries BCE[3]

The availability of water had obvious bonuses; it allowed the Garamante settlements in the valley to increase. Crops such as dates, olives and wheat were grown and these didn’t just support the local population, they offered a cash crop which could be exported. The location of the Garamantes sat on the vibrant commercial trade route. Indeed, Herodotus’ reference to the Garamantes was couched within a description of the various peoples and settlements which had grown up along the network of trading routes.

Though the Garamantes were isolated in one sense they were by no means detached from accessing goods and providing a place for traders to stop and refresh. Trade was a two way process, and though not as common as in later years, Roman pottery finds support this. Finds at Aghram Nadharif dated to as early as the 3rd century BCE[4] (though the majority date to the later centuries). As interesting was the presence of Hellenistic materials.

It’s in the context of trade where Pliny the Elder makes a curious comment. He ascribed a particular gemstone to the Garamantes[5]. It’s more plausible that these were imported and then worked into shape as a luxury item to export.

This itself is a further comment on the trans-Saharan trade route. It wasn’t simply a long linear trading conduit but something more complex. A commodity might be brought into the trade route and never reach the end. Instead it was traded for something else within the route, base materials might be crafted into a more valuable product. In this instance a dull gem cut and polished to result in a luxury item.

With Roman influence growing in North Africa it almost seemed inevitable that the Garamantes would come into direct contact with them at some point. In the 19 CE Augustus ordered Cornelius Balbus to subdue the Garamantes. Balbus led a force and took Garama, the more recent capital of the Garamantes.

Pliny is the main source for this event and he wrote that this earned Balbus a triumph, uniquely so as Balbus was the first foreigner to win one (he had been born in modern day Cadiz)[6]. From Pliny’s description it can be concluded that this had been some time in the making. Garamantes had offered previous resistance, the main trick being to fill in wells as they retreated which made pursuit of them impossible.

The Roman view may have been that the Garamantes were brought to heel, yet they were still capable of providing Rome with a problem it had no easy answer to. During the reign of Tiberius (14-37 CE) an individual called Tacfarinas led a guerrilla style campaign against Roman in Northern Africa.

Avoiding open conflict Tacfarinas led lighting attacks against Roman villages and infrastructure. This type of raiding was almost impossible to repel. By the time a Roman force arrived Tacfarinas was long gone. In one instance this style was dropped for a siege on a Roman fort which led to its capture and defeat.

The involvement of the Garamantes was subtle, Tacitus noted how they acted with a form of plausible deniability though they were offering men and support[7]. It’s difficult to imagine their expertise and networks not supporting Tacfarinas in some way. Their response to the defeat of Tacfarinas was to send dignitaries to Rome in order to confirm their friendship.

To what extent Tacfarinas offered a genuine threat to Rome is difficult to assess. Tacitus never held back from criticising Tiberius, so we are left to wonder whether this was given more weight in order to offer another criticism of Tiberius as an Emperor unable to control his empire.

The Garamantes are mentioned later that century. In 69 CE a war broke out between Leptis Magna and Oea, two cities on the coast. Oea recruited Garamantes and came close to winning, which would have been a disaster given the importance of Leptis to Rome.

Rome’s response came in the form of a force led by Valerius Festus and the Garamantian capital was once again captured. The outset wasn’t a sack or desolation but a treaty, presumably one which kept them from any military support or assistance. The existence of a treaty supports the argument that Rome appreciated the importance of the Garamantes. Rather than trodden into the sand, the Garamantes needed to be brought into the Roman fold. 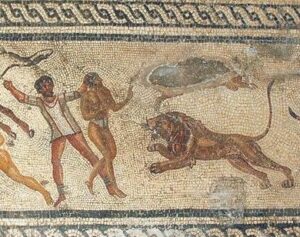 Mosaic from Leptis Magna depicting what are thought to be captured Garamantes being killed in the arena there.

A treaty wasn’t the only way Rome looked to control the Garamantes. In the later part of the 1st century AD Rome embarked on what became known as the Limes Tripolitania. This was a network of defensive outposts and forts, the aim of which was to oversee and control movement to the coast. In the later centuries these were improved, particularly under the Emperor Septimius Severus (193-211 CE), himself hailing from nearby Leptis Magna. This was matched with a more traditional approach as Severus took a force and conquered Garama in 202 CE. This indicates that the Garamantes had become a viable threat once more.

Despite the continued Roman aggression, the decline of the Garamantes wasn’t felt at the point of a gladius. It’s likely that a combination of events caused them to be reduced to near memory and empty sites.

The breakdown of the Roman empire in the 5th century CE had a knock on effect to the trade routes. The coastal cities didn’t offer the demand for what could be traded. Perhaps of more concern was that the fossilised water started to run low. Wells had to be dug deeper and by the early medieval period many were dry.

Either of these would have spelled disaster for the Garamantes, but the combination was almost overkill. With agriculture and trade greatly reduced there was little which could be done and so the Garamantes were reduced to scattered dwellings.

For hundreds of years the Garamantes were masters of their environment. They made the inhospitable hospitable and rather than simply ‘exist’ developed a trading system which linked the trade routes of Africa to the Mediterranean. Their ability in this context is matched only by their agricultural and technological nous. It’s no coincidence that Rome became acutely aware of their importance, hence their willingness to offer treaties.

[2] Foggara irrigation and the early state formation in the Libyan Sahara: The Garamantes of Fazzan. Prof Andrew Wilson