In recent years I have walked 5km for charity at Brighton’s Rise Superhero Run. I use the verb ‘walk’ because I have undertaken this in my Roman armour. The only exception, as was pointed out to me, was the lack of caligae. Trust me, having marched decades ago in caligae on cobblestones my feet simply wouldn’t permit this. In a previous march I took the pilum and gladius but in my most recent outing I left these at home. The reason for this was in part both practical and ethical. I was raising money for a charity which supported victims of domestic abuse and on the practical side carrying both weapons around at a crowded event didn’t seem a good idea. The pilum, in particular, offered a real danger if I dropped it or if it slipped from my grasp.

The remaining lorica segmentata, helmet, belt and scutum came in at around 19kg. I was still relatively encumbered, but it wasn’t really the weight which initially made the march a tricky affair.

The scutum is an iconic shield and on marches I’m told it could be strapped to the back. If so this makes sense as it handles like an umbrella, either pulling away from you or into you (depending on the direction of the wind). Though the scutum hangs well when you are holding it I did suffer from my arm going numb so had to switch a few times. I’m sure back in the day this would have elicited some sharp words from an optio or centurion.

As well as the anecdotal I wanted to capture something more tangible. Armed with a Fitbit I walked the 5km route a week before to get a base figure for heart rate, time and calories burned. I then compared with the results from my Fitbit on the day.

In terms of the time it took to walk the route the timings didn’t differ a great deal.

In armour I was moving at a very respectable 3.2 mph. Steven Kaye (who we will be reading much more from) estimated that the average speed for a legionary on a flat Roman road was 2.85 mph. However, I was travelling with around half the weight a 1st century AD legionary might be expected to carry which goes a little way to explain the disparity.

The real story of how my body managed the situation can be seen in the heart rates: 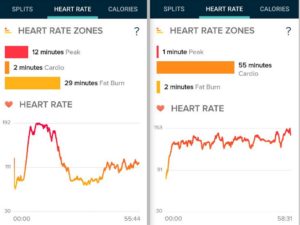 Without armour(A) and with armour (B).

One of the idiosyncrasies I have discovered with my Fitbit is that it doesn’t like to be fastened too tight on my wrist otherwise it results an unusually high reading. This is represented on the (A) graph in the form of the spike. Afterwards my heart rate drops back to a more stable range.

The graph where I wore armour (B) indicates a higher heart rate. It was around 140 bpm. The average for (A) is affected by the spike, if this is taken out then the average reads at approximately 105 bpm. I appreciate that I am only comparing one instance to another but it does give some sort of an indication. In order to move my body round a 5km course at a similar pace my heart had to beat 35 times per minute more when I wore armour.

The discovery that moving with armour is harder than doing the same activity without isn’t revelatory. What is interesting is just how much. This reflected in the calories burnt. 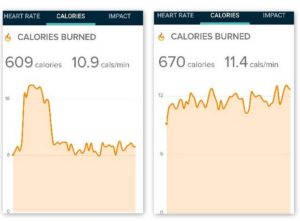 Without armour and with armour.

There was only 60 or so calorie burn difference between the two. But I think this was due to the false heart rate reading due to the Fitbit being too tight. You can see this as represented by the spike on the ‘without armour’ reading. If we took this spike out and kept the reading in line with the rest of the data the difference in calories burned could be around 150 calories.

When researching information about Legionary marching I stumbled upon a paper by Steven Kaye titled “Observations on marching Roman legionaries: velocities, energy expenditure, column formation and distances”. To say that it’s in depth would be an understatement. It’s certainly worth a read if that’s your bag (or even if you have just a passing interest in the topic). Kaye works on the premise of a legion (or legionary) marching 29km on a flat Roman road in August and building a basic camp at the end of it.

Along with the reams of data there are some very interesting snippets. For example, it would take an entire legion 1hr 22 minutes to all march past a specific point. Kaye also looks at all the logistical aspects of moving a body of around 5,000 men and supplies to another locations. Energy expenditure is calculated per legionary (even down to legionary weight) and based on the assumption that the legionary carried around 40kg in kit.

Using a table Kaye had formulated a legionary of around my weight (90kg) would expend 3,288 kcals over the course of the march (which would last 7hrs 22 minutes if you include rest stops). As mentioned weight of the legionary was taken into consideration, a much lighter legionary (60kg) might expend 2,777 kcals. This figure also took fatigue of the legionary into account.

But a legionary’s work wouldn’t end there. Assuming the legion arrived at the new location (which would have been previously scouted) a basic camp would need to be constructed. The most arduous task would have been digging the ditches and building ramparts. Again, Kaye factored in this activity and you can see the totals in the table below:

Kaye’s paper underlines just how much logistical thought had to go into supporting the army. It’s not just about having the right amount of supplies. If you want to move 5,000 men in an orderly fashion this needs tight discipline and organisation. Kaye scoped out what might be the daily routine of a legionary (weighting 80 kg) and though it’s slightly off the track I feel the content is interesting enough to share here. 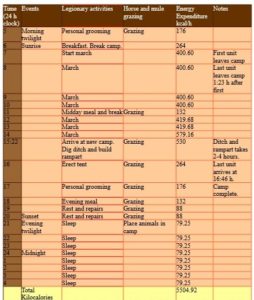 Podcast about the march.

I recorded a podcast on my experience of the march which you can listen to below. I also talk about Roman marching in general.

I hope you enjoyed this. It was tough work but great to stretch the legs, however, I was very sore following it.  One thing I learned was that I’m far from legionary level fit! 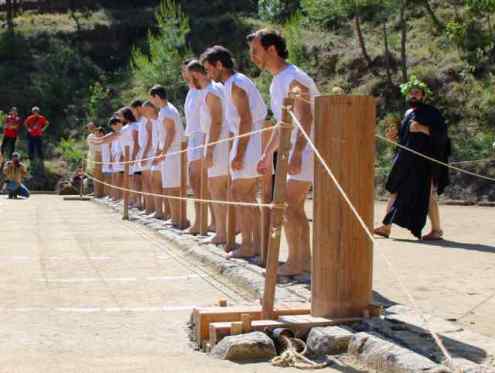