With the recent festivities in mind the angst over gift giving could be thought of as a modern concept. However, gifts were given in antiquity and if you’ve listened to my recent podcast on the Saturnalia you will have heard of the lengths which some went to. Martial, a 1st century CE poet wrote about the politics of gift giving. He even complained about a slew of tat sent to him and commented that he wished he’d just received money instead.

Going back further still, the Homeric heroes used gifts to maintain relationships between nobles and they were important social indicators. Whilst reading Eric Cline’s book 1177BC the year civilization collapsed I came across an incident involving a gift which allows for an insight into 2nd Millenium BCE diplomacy.

The tale starts in Mari, a Kingdom in upper Mesopotamia. It was here that Zimri-Lim had risen to power in or around 1776 BCE. It’s fair to say that Zimri-Lim wasn’t one to sit on his laurels. His religious observations were impressive, travelling on the back of a donkey to a shrine at Der and making what we might consider pilgrimages to Husla and Yamhad. He was also a pragmatist, and these pilgrimages had diplomatic meetings and a political agenda baked in. 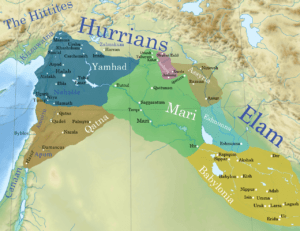 Map of Mari (courtesy of Wikipedia).

According to Cline, Zimri-Lim had an ice house built on the banks of the Euphrates which held snow collected from the mountains. It was used to cool a range of drinks, from the malt based to the stronger alcoholic variety, and he was said to have boasted that this was a first.

It’s possible then that Zimri-Lim sat in the shade supping a refreshing beverage whilst thinking on a range of things; one subject which would have demanded attention was Babylon to the south. When Zimri-Lim had claimed the throne he had supported Hammurabi, the Babylonian king, and had even sent troops to aid him. This wasn’t the only thing Zimri-Lim sent to Hammurabi, he also sent a pair of Cretan boots. We don’t know exactly what these boots looked like, but Lucia Alberti has come up with two possibilities. The first is a pair of more standard sandals which had interwoven straps, while the second is a more elaborate design which Alberti describes a sort of ‘open half boot’. 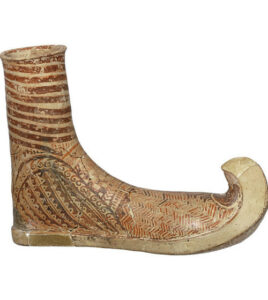 One possible version of the Cretan open boot.

Exactly what inspired Zimri-Lim to send the boots isn’t known, but we do know that he visited Ugarit (which lay on the coast). It’s reported that he saw the Cretan navy there – thus we can join tenuous dots together and suppose he thought this unusual design might be a novel gift for a King whose lands lay far from the Mediterranean. We know much of this partially due to tablets found at Mari. It was on one of these tablets where a record was found of the boots being returned by Hammurabi, which is quite something. Less fancied gifts might be given as gifts to other nobles or kings, similar to the modern day regifting. Returning a gift to its giver though? That’s a quite a statement.

By 1761 BCE relations between Mari and Babylon had broken down completely; Hammurabi defeated Zimri-Lim in battle and Mari was integrated into the Babylonian Empire. It’s tempting to think “was it due to those boots?” but it’s more likely that the return of the boots was a symptom, not a cause, of the eventual fall out.

Gift giving, and gift receiving, isn’t a new thing. Just remember to keep the receipt if you are sending a neighbouring King something a bit novel. Or alternatively keep with socks.

Lucia Alberti. Making visible the invisible: Cretain ojects mentioned in the cuneiform texts of Mari and archaeological discoveries in Crete in the II milennium BC.

Cinzia Pappi. Religion and Politics at the Divine Table: The Cultic Travels of Zimri-Lim.