Recently @Vicky_Austen tweeted the picture below. It’s of Barbie and Ken as Psyche and Cupid. 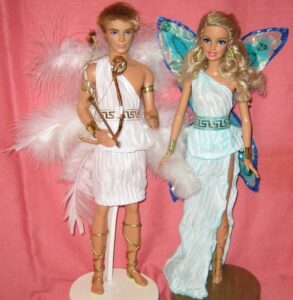 This reminded me that I had a piece from a while back which I hadn’t uploaded here. In it I looked at some Barbies which were based on Greek myth. Here they are and thanks to Vicky for inspiring me to get act together. 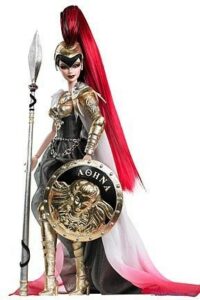 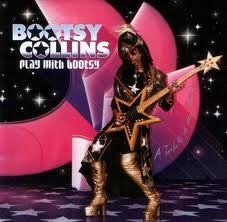 All the traditional elements are here, even the gorgon makes an appearance (or a rather beautified version) on the shield. Would Zeus let his daughter go out like this? Perhaps, but all that shiny gold would give him a headache….. 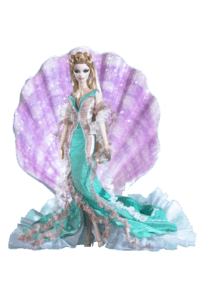 Greeks in antiquity rightfully respected and feared Aphrodite, and she was capable of entrapping and subduing anyone. The general trend in Greek myth was not to get involved with her. It wasn’t just Aphrodite though, Eos was a popular subject when pursuing men (see here for my piece on her).

As a result her worship almost takes on a magical context (Sappho’s Hymn to Aphrodite is underpinned by an incantation format). Sometimes she is portrayed as an Olympian but with chthonic roots (let’s not forget her origins from the castration of Ouranos).

It would have been nice to have seen her with the kestos himas (a sort of magic girdle) and sparrows (which feature in Sappho’s poem) but here we have an all-American Aphrodite that you could take home to meet your mother. 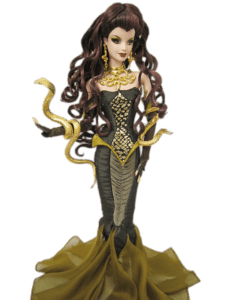 Now technically Medusa wasn’t a Goddess, she was the only mortal Gorgon which feels  somewhat unfair on her part. Having the snakes round the arms might make her more approachable but my first Medusa experience was very different.

Clash of the Titans (the 1981 film) featured a Medusa which terrified me as a kid and still does. I had the fortune to visit a Ray Harryhausen exhibition a few years ago. She still put me in my place. 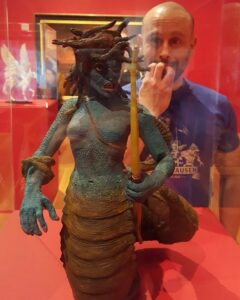 Medusa’s mythology is added to and furnished by various writers from antiquity. It wasn’t just who she was but how she looked. The earlier depictions in art gave way to a softer, even alluring character by the time of the Classical Period.

See below for a #VaseVlog I did back in 2018 on a famous Greek vase which depicts the moment she loses her head. 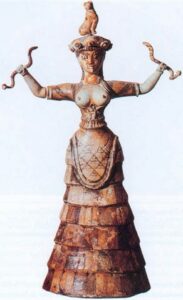 This is a representation of a Minoan snake goddess from Knossos, and dates to 1600 BCE. It’s truly Barbie BCE or as close as you might get. Can’t see it catching on though.

If you stumble across any more then feel free to tweet them to me @ancientblogger.