To the north west of Seville is the site of Italica. It can be easily visited via bus taken from the Plaza de Armas which takes 30 minutes. A quick tip here, you don’t need to queue and buy tickets in the main part of the station, just wander down to the buses and pay as you board.

Italica dates to the end of the 3rd century BCE. Originally it was settled by Scipio as he campaigned in Spain. However, much of what you can see dates to the later AD period as both Hadrian and Trajan are said to have originated from here. What’s left is a fascinating (and cheap) site far larger than you might imagine. With that in mind I would advise taking water, though there are basic facilities and a vending machine on site.

Though time and the elements have whittled it down it is still an impressive structure. It could hold 25,000 people.

Here are some short videos I shot using my phone which will hopefully give you some idea of scale. Apologies for the shaky handwork.

It was also used in Game of Thrones as The Dragon Pitt, fortunately no dragons were present the day I visited.

This sits in stark contrast to the amphitheatre. Where the head and eye are turned to the heavens here you’ll be looking at mosaics and details on the floor.

Walking around the streets is an experience in itself.

There are some exquisite designs in the Old City and these aren’t stagnant pieces of art awaiting the eyes of later visitors. The mosaics offer a window into the character and nature of the places where they are found.

Take the mosaic below found in the public toilets. It depicts pygmies fighting cranes, a motif dating back to the time of Homer’s Iliad (mentioned at the beginning of Book 3). Was this an in-joke? At best it’s fanciful, perhaps allowing for a joke or comment for its users. It may have been an ice-breaker as toilets were a communal space. 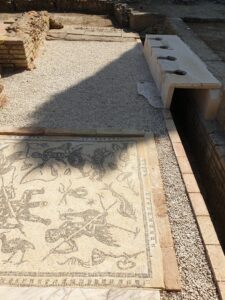 Perhaps the same artist was involved in the House of Neptune found nearby. Here pygmies fight cranes and in the centre piece mythical creatures feature alongside Neptune himself. 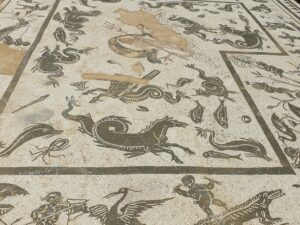 No prizes for guessing the theme of the mosaic at The House of the Birds. It’s suggested that the centre piece had a ‘theatre’ scene. My immediate thought was the play by Aristophanes, but that’s just speculation! 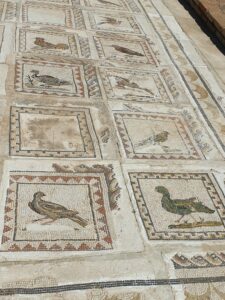 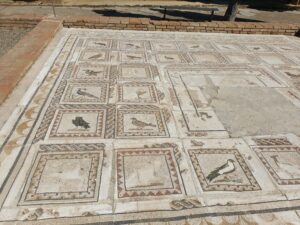 Animals, people and other subjects weren’t always required. The Labyrinth mosaic nods to the myth of Theseus. This is a technical feat by any standard and reminds us that patterns and designs were an option for any artist. 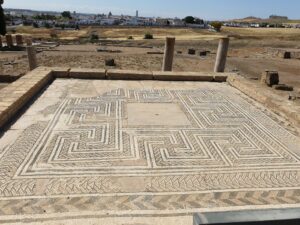 The House of the Planetarium is host to a beautiful mosaic which has deities as days of the week. The days of the week were linked to observable planets (or what were deemed as such). The Sun, Moon, Mars, Mercury, Jupiter, Venus and Saturn all feature and are associated with Roman gods.

A plaque at the site points out that designation of week days in this context is linked to Egypt, and we have had a possible recurring theme seen elsewhere. Mosaics depicting crocodiles, Pygmies and even palm trees were associated with Egypt and are found in Italica. 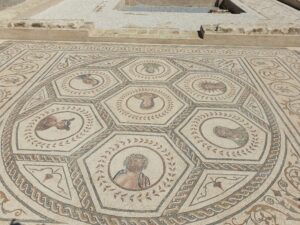 In the House of Hylas a familiar, if not scary, face can be found. Medusa seems quite amicable and the design around the head is intriguing.

Here’s a shot of the mosaic in it’s full context. 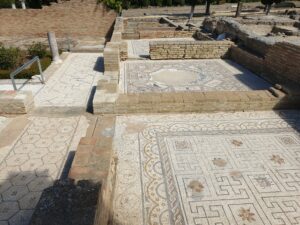 Medusa is in the room on the bottom right of the picture. With the buildings as ‘open’ as they are it does allow you to see the plan of buildings. Often the rooms are small by modern standards. The final mosaic is a stand alone structure. 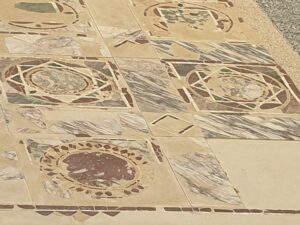 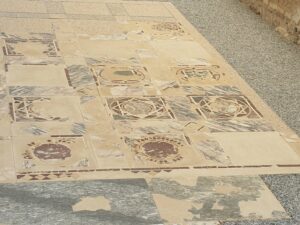 The above doesn’t look much yet it denoted the height of luxury in this residence. Opus Sectile was a form of mosaic which utilised crafted stone and this could involve high quality (and thus expensive) material. A luxury pavement of sorts was a real statement piece and suggests a very wealthy resident.

As with many Roman settlements the addition of Baths was a must. Unfortunately it’s not that easy to get a good layout shot. There is a platform with a guide to what you can see. It’s crucial in understanding what the various remains are. 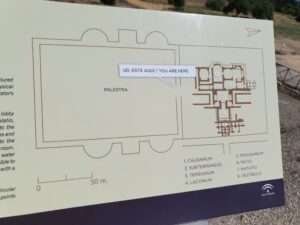 (If you want to know more about Roman baths you might want to check out my podcast all about them).

Here’s a shot of the layout. To align yourself with the map you will need to note that I am facing north (which is ‘right’ on the guide). The Palaestra was behind me. 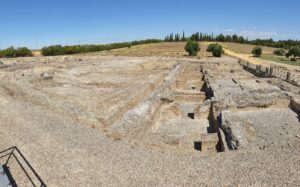 The Old City doesn’t have many standing remains yet the House of the Planetarium still has the internal bakery present. You can make out the bread ovens which served the household. 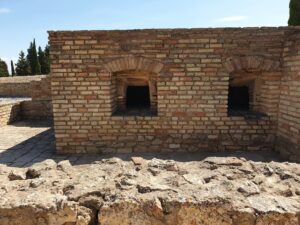 The bakery served the house and occupied the corner of the building. This allows for a rare photo opportunity involving a discernible street corner.

You can catch the bus back from outside the site (just look left as you visit, the stop is next to the petrol station). I would recommend stopping for refreshments at the establishment opposite. There’s plenty of shade to sit into and the staff are very friendly. It’s good value as well.