In 55 BCE Pompey the Great held games as part of a dedication to a temple named Venus the Conqueror which celebrated his conquests in the East. These included beast hunts and though they were a staple of such an event the last day involved an animal which rarely featured, the elephant.

Cicero’s account of this noted how the crowd were not imbued by the normal blood lust of the day, in fact those watching came to feel a deep sorrow for the elephants[1]. Cicero explained that this was due to the crowd seeing something of themselves in the elephants. Pliny described the same event in more detail, the pitiful wailing of the elephants and their conduct brought the crowd to tears and curses were shouted at Pompey[2].

Pliny’s words are difficult reading for anyone who loves elephants or even animals in general. For Pliny the elephant is the closest to man in terms of intelligence of all the land mammals. It’s not just in the cerebral capacity that Pliny holds the elephant in high regard.

“It is sensible alike of the pleasures of love and glory, and, to a degree that is rare among men even, possesses notions of honesty, prudence, and equity; it has a religious respect also for the stars, and a veneration for the sun and the moon. (Pliny NH 8.1)”

The last point Pliny makes is possibly the most curious, that the elephant is capable of some level of religious or superstitious observance. This point is also picked up by Cassius Dio who wrote about the games of 55 BCE. Even Cassius speculated that the elephants raised their trunks to appeal to the heavens[3].

The picture given by these accounts is of an animal least equipped for a battlefield, yet we know elephants were used in this capacity. Hannibal, the grand bogeyman of Rome himself, was strongly associated with them. So how did Dumbo and friends end up this way?.

Species of elephant did exist in the Mediterranean, but it was in India where we can find early descriptions of domesticated ones. Early Vedic hymns mention elephants used as transport but it’s not until the later texts, such as the Ramayana and Mahabharata where elephants are mentioned in a military capacity. The dating of these supports the argument that by the 4 century BCE the elephant was used in India for war.

The empires to the north and west of India were quick to pick up on this new type of unit. The Asian elephant is sizeable – some 9 feet at the shoulder (2.7 metres) and weighing in at just shy of 3,000 kg. Though the animal can plod along quite happily (around 5 miles an hour) it can reach speeds of 24 mph when charging. This alone would present a devastating weapon. Yet the elephant’s size also meant it could not only support a driver (known as a mahout) but a tower which could house archers or other skirmishers (a howdah). These impact units could now facilitate ranged weapons, a dangerous combination. Their very impressive characteristics did come at a price, an Asian elephant would require around 100-180kg of food a day. It must have been a quartermaster’s nightmare.

Elephants may have been used earlier in the battle of Cunaxa (401 BCE) but for the purposes of this discussion we’ll start with their first documented encounter with a Western army – against Alexander in the Battle of Gaugamela (331 BCE).

Alexander and the East.

The elephants featured on the Persian left wing and don’t seem to have had much effect. It’s possible that their placement was to keep Alexander’s cavalry at bay, as the smell and sight of elephants was said to terrify horses. At Gaugamela the cavalry strike came not on the flank but at the centre of the Persian line and I wonder if this was in part due to where the elephants were stationed.

Alexander was soon to become far more familiarized with the war elephant. In the Battle of the Hydaspes (326 BCE) he took on a far more capable contingent of 100 elephants led by King Porus.

The elephants were placed amidst the heavy infantry in the centre of Porus’ army and moved forward to attack the Macedonian infantry. They were initially quite successful; Arrian mentions that it was only down to the experience of Alexander’s men (in particular the phallangitai) that they did not break through. The fact that these men were armed with the sarissa (a spear of around 13-21 feet) was fortunate as this was an ideal weapon for tormenting the oncoming elephants. The light armoured troops were able to throw javelins at them and soon the poor animals were trampling on their infantry in order to get away. Repeated cavalry charges from Alexander had boxed Porus’ army in further. Confined spaces and panicking elephants do not go well together.

The Battle of the Hydaspes was the first to hint at the potential benefits and drawbacks of elephants. They could be very useful against cavalry or infantry and Alexander’s elite troops had only just held them back. However, they were temperamental and could stampede on their own troops. Following the battle Alexander recruited some of the elephants and sent for more on his march back to Babylon. Exactly what or how he intended using them will never be known. 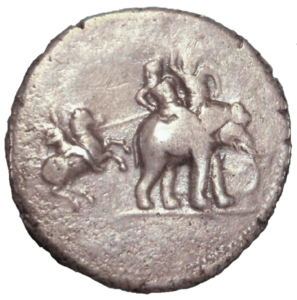 “Victory coin” of Alexander the Great, minted in Babylon c. 322 BC, following his campaigns in the Indian subcontinent. Reverse: Alexander attacking king Porus on his elephant. Silver. British Museum.

Alexander’s death, in 323 BCE, ushered in chaos as his generals, friends and relatives all fought it out to reign supreme.  Though the initial meetings of the generals fleshed out a basic compromise of territories (known as the Partition of Babylon) it was the definition of ephemeral, within a year of his death the first war had broken out. Collectively these are known as the Wars of the Successors (or Wars of the Diadochi) and, as we shall see, elephants were used by Western commanders for the first time.

Elephants and the Wars of the Successors.

In the opening round of battles elephants were used to good effect. The invasion of Egypt by Perdiccas around 320 BCE featured elephants at siege, tearing down palisades[4]. Antigonus also set them against Alcetas with similar fury. These are fleeting mentions and it wasn’t until the set piece battles of the late 4th century BCE that we get the chance to see how this new unit was handled.

The first of these was the Battle of Paraitacene (317 BCE), the first of two battles between Antigonus and Eumenes. Both commanders fielded elephants in different ways, the 100 belonging to Eumenes (at a stupendous cost of 120 talents) were placed on his left flank. Antigonus fielded his meagre compliment of 65 across the entire line of his army. They were absent during the battle which suggests that neither commander was quite sure how to deploy them.

The second meeting of the two at Gabiene (316 BCE) sat in stark contrast to the earlier battle as elephants did feature. The opening gambit of the engagement involved both sets fighting in the centre of the battlefield and this encounter was to decide the outcome, though not in a way you might expect. The battlefield was a sandy plain and the resulting dust thrown up by the elephants obscured the fighting. Neither commander could see what was happening and Antigonus soon realized that this cover was an opportunity in disguise. He led his cavalry round the flank and fell upon the rear of Eumenes’ army, which soon routed.

Antigonus hadn’t just fought Eumenes, he’d been at war with other Diadochi and in 301 BCE several of them combined to fight him. The Antagonids (Antigonus and his son Demetrius) faced a mix of units from the other successors, which featured Seleucus and around 400 elephants. In contrast the Antagonids possessed only 75. This couldn’t have concerned Antigonus much as at both Paraitacene and Gabiene he had beaten an army with a larger elephant contingent.

His son had seen the reverse of this. At Gaza (312 BCE) Demetrius had faced Seleucus and Demetrius held the advantage in terms of elephants (40 to Seleucus’ nil). Yet he had been beaten. Ironically elephants may not have been seen as carrying much weight in deciding battles. This was about to change.

The Diadochi generals formed an Allied army to face Antigonus and the two sides were around the same size. The only difference, as mentioned, was that the Allied force had around 40 elephants to Antigonus’ 75.

Antigonus’ plan was simple and effective. He needed to tie up the infantry and let his cavalry on the right flank (led by Demetrius) smash the Allied cavalry on the left. Demetrius would then fall back on the exposed Allied line. A tactic Alexander the Great would have been proud of. Antigonus placed his elephants out in front and it’s argued that the Allied army placed 100 or so elephants in similar fashion.

Exactly where the remaining Allied elephants were placed is not known. Though, in an ironic turn of events they were to decide the outcome of the battle.

Demetrius was stopped from delivering the final blow. Antigonus and his infantry fought on as they waited in vain. Soon they were worn down and Antigonus met his end.

The battle was decided by a single non-encounter, a standoff between cavalry and elephants. Academics and scholars have debated exactly how and what had happened. Was this planned, sheer luck or an astute moment of innovation?

It’s possible that the Allied force resisted fielding too many elephants exactly because they could be targeted and made to stampede on their own lines. The tactic was therefore to deploy enough to counter Antigonus’ elephants with some in reserve just in case. Whatever the decision they were in the right place at the right time.

Demetrius’ encounter with elephants may not have made much of an impression, other than amazement. It did make an impact with a young officer serving with him. His name was Pyrrhus and in the 3rd century BCE he was going to bring the elephant into the very heart of the Mediterranean.