Lefkada (or to use its earlier name Leucas) is located in the Ionian Sea. It was here that Aphrodite grieved for the loss of her lover Adonis and where she found a cure for her heartbreak.

Apollo suggested that she should leap from the White Rock into the sea. This did the trick and whether it was merely coincidental, gods had a tendency to get over an ex pretty quickly, the White Rock had its first success. However, as we’ll see this feat might cure one type of break but at the expense of incurring others.

What inspired Apollo to suggest such an act isn’t clear, though it is worth noting that he has form in advocating dangerous jumping. Pausanias wrote of a cave near Magnesia sacred to him where his followers would leap off precipices into a river[1]. Strabo comments that Sappho was the first mortal to have jumped from the rock due to her love for Phaon[2], before arguing that it might have been Cephalus after he had fallen for Pteralas. Sappho might have met her end as a result of this according to one myth at least. If so she wouldn’t be the only one.

A more comprehensive list of those who took the plunge is supplied by  Conon, a Greek grammarian writing in the time of Augustus. Conon’s Narratives survive due to Photios of Constantine, who collated many works in the 9th century AD. It’s likely that Conon himself had referred to older sources himself when compiling a list of those who took on the vertigo-inducing cure. 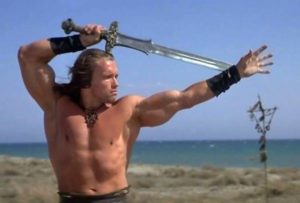 Some of the jumpers.

She was scorned by Dardanus of Abydos and scratched out his eyes whilst he slept. As a divine punishment her love for him was made stronger. The attempt to cure herself was the last thing she ever did.

We only know that the object of his desire was a youth. The jump also killed him.

A comic poet (mid-4th century BC) and possibly the son of the famous Aristophanes. He survived but we don’t know if it cured him of his infatuation.

Here’s someone who was even nicknamed ‘White Rock’ because he had jumped from the rock four times, the last of which did the trick and he lived to tell the tale.

To make things more complicated Rhodope hadn’t fallen head over heels with one person as she’d become infatuated with twins. Whether or not this required her to jump twice was never an option as she didn’t survive the first.

There is even a poem to the rock, composed by Charinus who jumped after falling in love with a eunuch called Eupator. Though he survived he broke his leg and died a few days later. Awaiting his fate he wrote the following:

“To the devil with you, deceptive and murderous rock of Leukos!

You have turned to cinders by your vain words of hope.

Can Eupator suffer so much for Eros.”

In a very different context Strabo recounts how the locals of Lefkada had a yearly practice of hurling individuals off the White Rock and into the sea. It was undertaken (as Strabo notes) “to avert evil”. This is an apotropaic ritual, the function of which is to ward off misfortune or unwanted scenarios (e.g. disease) . Some versions of this involve an individual who becomes the very manifestation of misfortune and they are punished in some way.

Where we might use the term ‘scapegoat’ to describe someone given this unfortunate role the Greeks used the word pharmakos. The extent to the punishment a pharmakos might receive is debated, it could be symbolic or very real. In the Thargelia festival at Athens a male and female pharmakos were dressed in figs and driven from the city in order to cleanse it.

The White Rock gave a location where a pharmakos could be removed from society in quite a unique way. It might have offered the locals some sense of absolution as whether the pharmakos survived or not could be cited as the will of the gods. If the pharmakos did return to the surface there were boats which would fish them out of the sea and escort him to the border where they would be exiled.

One detail Strabo mentioned is that the pharmakos would be adorned with feathers and even a live bird or two. For Strabo the intention was that this would help alleviate the fall, yet I think that there may be some confusion on Strabo’s part. As bizarre as it sounds the idea of people jumping with birds and feathers attached to them does make sense, albeit in a particular context and not requiring a pharmakos. Birds, unrequited love and a tragic love story are all elements of a myth which Davidson elaborates upon in his book Greeks and Greek Love.

Set in Athens the story involved Meletus, who was was in love with Timagoras. As a challenge to prove his love Meletus was tasked with stealing a pair of birds for him. After achieving this Timagoras then cruelly snubbed the besotted Meletus who ran up to the Acropolis and jumped to his death.

As if possessed Meletus found himself following the same path to the Acropolis as Meletus had taken. Unable to stop he even grabbed two birds before he jumped from the same spot Meletus had. The fall killed Timagoras whose body lay crumpled next to Meletus. This left an impression both on the floor and the Athenians as It was at this spot that an altar was set up to worship ‘Love Avenged’[3].

There is also a strong link between Aphrodite  and birds. We may be familiar with Aphrodite’s magical girdle, but the iunx was less well known. The iunx is described by Pindar as being used by Medea to seduce Jason. The iunx was formed of a wheel tied to a bird which doesn’t exactly scream romance. 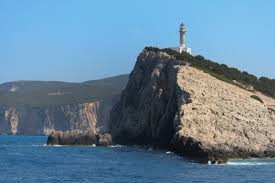 With this in mind it’s possible that some of those who jumped from the White Rock did so with feathers, and even live birds attached to them. In the mind of the jumper these accessories borrowed from the theme of love magic and may have supplied the act with more potency. If so then it could be that Strabo confused the two different types of people jumping. The pharmakos who was being exiled and the jilted lover who occasionally wore avian attire.

The White Rock and liminality.

The White Rock was a dominating geographical feature, but it also came to be referenced in more abstract concepts. In Euripides’ satyr play The Cyclops the White Rock is mentioned in the following lines:

in return for drinking one cup of that wine

and throwing myself from the white rock into the brine,

once I am intoxicated, with eyebrows relaxed.

One more time taking off in the air, down from the White

Rock into the dark waves do I dive, intoxicated with lust. (PMG 37608)

Nagy points out that in both instances falling from the White Rock is parallel to falling into a swoon[4]. He goes further and concludes that “the White Rock is the boundary delimiting the conscious and the unconscious—be it a trance, stupor, sleep, or even death”.

In Homer’s Odyssey the White Rock appears as a backdrop in front of which the souls of the suitors pass as they descend into the Underworld[5]. It is possible that Homer was referring to another geographical feature, but with the other references it’s plausible that the White Rock became a term used to indicate a substantial change a person had gone through.

It was Apollo who, according to one myth, was the inspiration behind the idea that heartbreak could be cured by a simple jump from the White Rock. I’m unsure if it was ever pointed out that the first entity to undertake this was a goddess who didn’t have to worry about dying, but it became a way of reconciling the emotional with the physical.

It’s possible that the jump was a way for people to deal with their emotional state. It’s an extreme version of getting a new haircut the day after a break-up.

Apollo’s temple didn’t survive into the modern period and today the White Rock has a lighthouse sat upon it. A deity associated with light and who caused a number of injuries and deaths is now replaced by a light bearer looking to stop such outcomes. I think the Olympians got irony and would approve.

[4] Nagy, Phaethon, Sappho’s Phaon, and the White Rock of Leukas: “Reading” the Symbols of Greek Lyric