As a kid I remember hearing the tale of Theseus for the first time and being quite scared, a half man half bull creature lurking in winding corridors will spook most kids. Add to that the predilection for young human flesh and you have the ultimate monster hiding under the bed. That is until a few years later when a clown with a red balloon appeared on my TV.

How the ancient Greeks imagined the Minotaur to look isn’t clear and this isn’t surprising.  The Minotaur offered the pottery painter a variety of ways to showcase their talent. Whether it was a Magic Mike Minotaur with six pack or one with a tail and seemingly covered in fur. 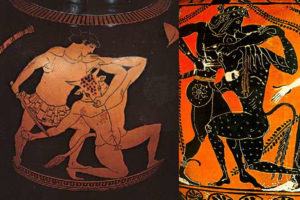 That said there was some standardisation. The Minotaur was shown as bipedal and possessed a largely human form. Perhaps this is what made it scarier, the closeness in form to human paradoxically made it so as it seemed even less human. This quirk is known as the ‘uncanny valley’ and in modern times is concerned with how people respond to robots. In short the hypothesis suggests that the more human a robot appears the more we respond positively to it. However, once a certain point of ‘realism’ is achieved the response becomes increasingly negative.

As we will see film makers adopted the artistic licence the pottery painters of Ancient Greece when putting the Minotaur on the big screen. In many ways the Minotaur was a fantastic character to have facing a hero. It could wield weapons and have some sentience or be a more bestial form, relying on its strength and size.

The following films all feature Minotaur in some form or another. There are some I have left out or simply missed, as ever I’d be keen to know what ones you might have wanted to see so tweet me @ancientblogger.

In 2012 Tom Hardy was interviewed on The Jonathan Ross show, footage of him modelling from his youth was shown. Rather than blush with embarrassment Hardy quipped that he was thankful it wasn’t a clip of him from the Minotaur film. 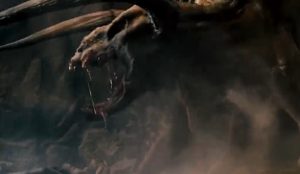 in fairness this is his bad side, he just needs the right instagram filter

That pretty much sums it up. The only thing of note is that it sticks to the origin myth in having the queen give birth to a Minotaur baby. I have no idea what you’d call the infant, minotaurette sounds just wrong.

Greek B movie horror with Donald Pleasance and Peter Cushing. Cushing plays the lead Satanist who professes the ways of the ‘old gods’ and wears a nice red number and Pleasance plays the priest trying to stop it all. 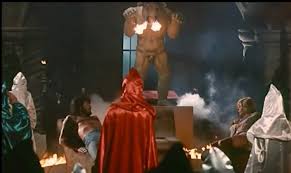 The Minotaur is largely incidental, it’s just a statue which snorts fire. It’s what interior designers would call a statement piece. I might be giving the film too much credit but I wonder if there’s a parallel here with the worship of Baal in which infants were said to be sacrificed using a statue which was part of a furnace? I probably am.

This film sits within the Peplum genre (largely Italian sword’n’sandal flicks made in the 60s), less interesting than the Minotaur was that it featured Bob Mathias who played Theseus. Mathias won gold for the US in the decathlon in the 1948 and 1952 Summer Olympics and was later a Congressman. 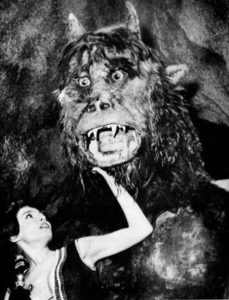 what happens when Gruffalo cousins marry

Now we’re getting serious. This Minotaur is armed and is presented to us far more as a rationale creature rather than a beast. In the first Narnia film the Minotaurs served under the White Witch (thus ensuring the ‘baddy’ element). Ironically in the battle this one’s killed by a centaur. Myth on myth action.

In later Narnia films the Minotaurs swap sides, here’s one looking cheery on a boat. 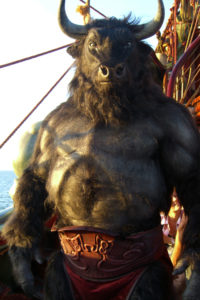 Probably the toughest of them all. Why you say? Because he’s taking on Sean Connery. He’s given a club here and is really a human with a Minotaur headpiece. It’s worth noting the relationship between weapons and intelligence level. Big dumb brute = club, bit cleverer (as in some of the centaurs) = spear or bow. 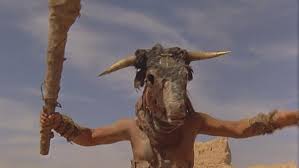 Got the song out of your head yet? Me neither. Without doubt THE scariest Minotaur, as a kid this terrified me. My mum said it was because I found a dead metallic Minotaur in the woods, but I’m not so sure. 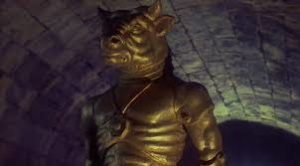 Minoton is created by the evil Queen Zenobia as a sort of robot henchminotaur. In the film he’s depicted on screen in two forms, model animation and by an actor. The former was by the famous Ray Harryhausen whose iconic work allowed many great movie moments. The actor portraying him on screen needed to be large enough to wear the costume. Step forward Peter Mayhew, or Chewbacca as you will more likely know him.

This was Peter’s first foray into film so without Minoton we’d have Chewie played by someone else (possibly David Prowse who ended up playing Darth Vader).

This is a purely CGI Minotaur which affords the beast much more room for rampant destruction. Here it is portrayed as a wild beast, incredibly strong but easily outwitted. *Spoiler alert* in this instance the Minotaur is killed by a bit of his broken horn, unsure if this is Freudian but it’s certainly ironic. 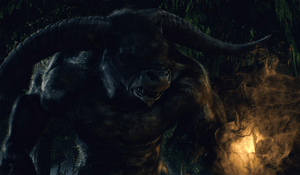 From the examples you can see how the Minotaur has been portrayed differently and for different reasons. I hope you enjoyed reading, keep an eye out for more #MythicMovieMonsters articles.