The link between Italy and Hercules may not seem obvious. Yet there was a relationship between the two. The myth of Geryon’s  cattle and the defeat of Cacus both involve Hercules in and around Rome, although it’s worth pointing out that Rome hadn’t yet been founded.

Roll forward to 1951 and to the post WW2 era of cinema. In this year Quo Vadis was released and had been produced in Italy. The rationale was simple, it was much cheaper to make films abroad at this point. Quo Vadis was a huge success. The trend of making films in Italy resulted in the eternal city becoming known as ‘Hollywood on the Tiber’.

Success breeds imitation and soon everyone was getting on the act, literally. A genre of film resulted called ‘Peplum’. These were cheaper films, made for an international market and with a famous strong-man character from history as the lead. Samson, Hercules and Goliath all partook of baddy smashing with panache.

With CGI, extreme conditioning and more nefarious options ruled out the lead needed to be suitably muscular. Hence the search went on for bodybuilders or strongmen. What resulted was gallons of body oil and, well, you’ll see.

Steve Reeves’ first lead appearance has been cited as where the Peplum genre really took off. The film was a huge success, it was like Sharknado, only with some acting and no sharks. Previously Reeves had only played bit parts, it was one of those (in the musical Athena) which got him noted by the daughter of the director. Just for some trivia, Reeves was one of the athletes in Gentlemen Prefer Blondes.

The success led to several years of work in Italian cinema. It’s even alleged that Reeves was offered the role of James Bond in Dr No (1962) and turned it down. Reeves continued to work playing other large types, such as Goliath, the fabulously named Randus (Spartacus’ son) and a giant in more sword’n’sandal type Italian films.

Three interesting points mark this Italian film out. The first is that it features Reg Park, he of British bodybuilding fame. The second is that the baddie is played by Christopher Lee (though they dub his voice for some reason). The third is that it featured zombies or zombie-like creatures. I’m wary of being drawn into the furious online world of zombie definition but consider that Night of the Living Dead wasn’t released till 1968.

The inclusion of zombies does make some sense as Hercules descended to Hades. Sadly no singing frogs appear.

A character known for his physicality provides a great comic option. Little surprise that this was the most financially successful of all the Three Stooges films. Hercules was played by the appropriately named Samson Burke. He wasn’t just a bodybuilder, he’d also represented Canada at the 1948 Summer Olympics in swimming and wrestling. 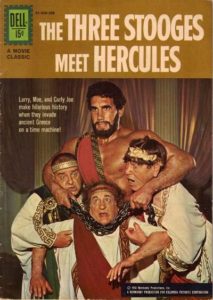 One of my favourite films ever and the first I remember seeing Hercules in. Not a central role by any means though worth it for the discus throw and for managing to get several crew mates squashed when he awakened Talos. 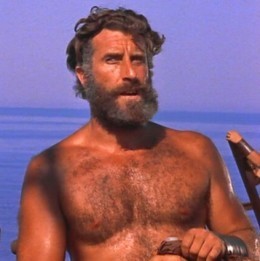 Nigel Green wasn’t a bodybuilder, he was an actor who happened to be 6’4. This had led to him being cast as Little John earlier in his career. If you don’t recognise him from this role you might remember him from Zulu which was filmed a year later. In Zulu he played the imposing Colour sergeant Frank Bourne.

You get the sense that the Italian film Industry was finally running out of vehicles for Hercules. Though as we’ll see later, this isn’t the most baffling Hercules film. In this film men from the Moon invade and Hercules faces a number of foes. There is a weird monkey type creature, a Batman-esque spike trap and Redolphis (below). 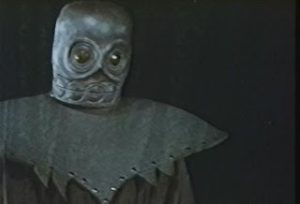 The man in the loincloth was Sergio Ciani an Italian bodybuilder who had doubled for Steve Reeves and who changed his name to Alan Steel. Changing your name to help your career was evident in our next film. 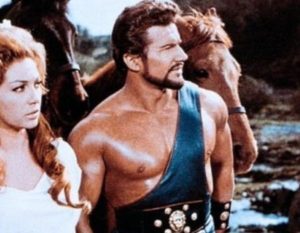 Reg Park, who I mentioned earlier, was a big name in bodybuilding. He advised a fellow bodybuilder that acting in these types of big-man roles could be a good career. The bodybuilder in question was a 22-year-old Arnold Schwarzenegger. In the film he’s credited as Arnold Strong as his surname was considered too long. 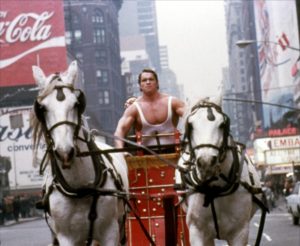 The film is utterly bizarre, kitsch and tongue-in-cheek. Sequences involve riding a chariot in Central Park, wrestling the least convincing bear in film history and scaring a woman on a plane by appearing on the other side of the window.

In much later interview Arnie admitted he regretted being in this film. Think on that.

With the success of the Star Wars films Hercules was given something of a sci-fi makeover. The man to fill the loincloth was Lou Ferrigno, another bodybuilder. His most famous role up until this was as the Incredible Hulk in the TV series.

According to Moria the film is loosely based on the 1958 Steve Reeves’ film. Except parts are set in space. If you watch the trailer below there’s a swordfight (around 1.05). The glowing weapons and sound effects have a very Luke/Darth feel to them. I’ll let you judge.

Lou Ferrigno returned in a film which isn’t worth watching apart from the opening credits which is a copy of those of Superman (where the names fly across the screen). Thanks again to Moria for that one. History hasn’t judged this one particularly well either. 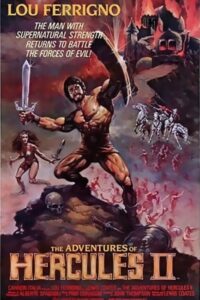 In many ways the 2014 film continued the theme of casting strongmen in the lead role. Albeit with a twist. The Rock had been acting for over a decade before he starred as Hercules. The film was also inspired by a comic series titled The Thracian Wars.

In many ways this gave it an advantage other films hadn’t. A lead who had been acting for some time, a sound narrative and a good supporting cast.