From Germany to the UK.

In 1847 Sir Charles Isham journeyed back from Germany and returned with 21 smaller friends. These were small figures which themselves had evolved from what the Italians had called Gobbi. The garden gnome had arrived.

It wasn’t until the 1930s that the term ‘gnome’ entered usage in England and after the Second World War their popularity grew and they entered the cultural cycle of chic, kitsch and retro. But was there something else to these diminutive garden helpers? Perhaps that cheeky grin concealed a secret, and a rather large one at that. 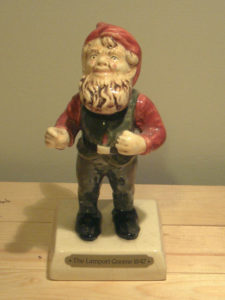 A replica of one of the gnomes Sir Charles brought back

In antiquity a Greek city called Lampsacus stood on the eastern side of the Hellespont. Its proximity to the coast made it rich through trade but also attracted the eyes of various conquerors, yet it was not any of them who was its most famous resident.

Priapus was apparently born here. His mother Aphrodite had irked Hera enough for the goddess to curse Aphrodite’s son and this took the form of gigantic genitalia. In antiquity such an endowment wasn’t necessarily a positive thing. An association was made with lustfulness and lack of self control. This lack of control was a quality belonging to the uncivilised. Many a Greek vase depicts a satyr, or two, sporting quite the phallus and engaging in riotous behaviour.

The Lampsacenes soon banished Priapus but bade him come back after they all came down with a venereal disease. If you are interested in STIs in antiquity, then you can catch two podcasts I did on them earlier this year on my Libsyn or iTunes. Have your lunch before though. 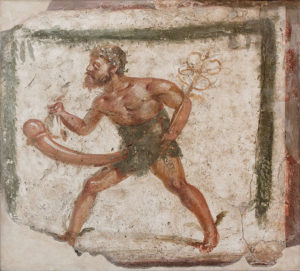 Priapus as hermes, from Pompeii. Both deities shared an association with boundaries.

Priapus was won over with a promise from Lampsacus to make him guardian of their gardens and he existed as a rustic deity, watcher of crops, shepherds and intriguingly sailors. In this context he still belonged as a god of fertility which makes sense given his appearance.

His cult passed over to mainland Greece where he continued to guard over farm gardens, a 3rd century BCE poem by Leonidas of Tarentum places him firmly in the context of a guardian deity.

Here on the garden wall did Dinomenes set me up, wakeful Priapus, to guard his greens. But look, thief, how excited I am. And is this, you say, all for the sake of a few greens? For the sake of these few.

The poem featured on the statue of Priapus was a cheerful reminder to any would be thief that the consequences would be harsh. Later epigrams would be far more detailed, mixing violence and obscenity in equal measure.

It was Rome who picked up the baton and moved Priapus into the realm of the epigram with due vigour and thrust. Priapus was well suited to the Roman epigram which, as Hooper comments, was often far more obscene than its Greek counterpart.

The Roman epigrams formed a collection known as the Priapeia, numbering 95 in total and included Martial and Catullus. These often carried a similar warning to the epigram by Leonidas, but would go into explicit physiological detail in describing the exact punishment dealt by Priapus if you were caught scrumping in the garden he was guarding.  I won’t recount them here but the Wikipedia entry contains one such example. These epigrams would most likely feature on the wooden image of Priapus placed in the Roman garden.

Priapus as guardian does present certain challenges in that interpretation. Even though he was a god who offered a truly unpleasant punishment he was also one not to be taken seriously. The endeavours of Priapus also contain a comic motif, if not a dark one. When a braying donkey interrupted his attempts on a sleeping nymph he beat the poor animal to death with his member.

There exists a clash between a powerful guardian deity and one who is comical. Richlin sums it up neatly when commenting that he is “a ridiculous god, a god to be mocked…He is the source of threats, god of the phallus yet he is also a shabby wooden idol”.

This may have been the Roman interpretation of Priapus and here we meet another problem. Priapus was a guardian of a functioning garden which supplied families with food. However, in Rome he was often present in the luxurious gardens of the rich. These were not to sustain but to entertain. In poem 33 of the Priapeia the god bemoans that lack of nymphs he has to chase anymore. Uden argues that this is something of an allegory for the function of the garden in Rome. The garden had moved from a functional necessity to a trinket for the rich to showcase their wealth.

The garden gnome was called Gartenzwerg (‘garden dwarf’) by the Germans. A Swiss alchemist in the 16th century called Paracelsus coined the term gnome from gnomos, deriving from the Greek for ‘earth-dweller’.

Gnome-like characters featured all over the Aegean. The Dactyl’s were an archaic race of small phallic beings born to Gaia and were master blacksmiths. One variety of Dactyls came from Mount Ida in Turkey (specifically an area  known in antiquity as Phrygia). This may not seem important until you look that the image below and specifically the hat. This type of headwear is called a Phrygian cap and is very similar to the type worn by garden gnomes. 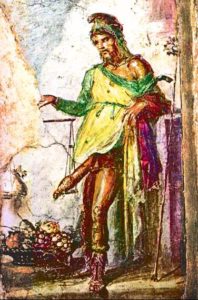 Fresco from Pompeii, the cap is not what you immediately notice..

Of course, this may all be coincidental. That a gnome and a deity from antiquity share a taste for a specific type of headwear doesn’t mean much. However, there are other aspects which connect the two. If nothing Priapus seems to be an early anticipation of the gnome, specifically in the gardens of wealthy Romans. Here the deity stood out of context, almost deliberately so.

Perhaps the gnome with a sly look about him and a fishing rod in hand is alluding to something far more than the sum of his parts?