The Iliad is full of characters, some of them less well known than others and Sarpedon is a really crucial part of the Homer’s tale.  Through him a number of themes and motifs are examined and codes reinforced. He isn’t a frontrunner in the fame stakes and probably known more for the representation of his death. However, I’d like to take the chance to give the chap a bit more webtime.

We first meet Sarpedon in conversation with Hector (Bk V). It’s an intense introduction, here we find him doing two things, namely scolding the Trojan leader and verbalising some quite rebellious thoughts about his reasons for fighting.

This is really potent stuff, the former is very audacious and the fact that Hector doesn’t respond really gives Sarpedon traction as a character. The second, in querying his reasons to fight, are normally thoughts attributed to Achilles. So here we have a character presented to us who is mirroring Achilles in thought and dealing with the theme of leadership, which is ironic given the issue Achilles has with Agamemnon’s leadership of the Greeks. Quite an introdution.

The art of banter

Next up we have a very interesting exchange in his duel with Tlepolemus (Bk V) which should be captioned ‘Banter 101’.Both he and Tlepolemus share a link to Zeus (Tlepolemus through his father Herakles and Sarpedon through being a son of Zeus).  Tlepolemus’ tactic is to suggest that Sarpedon’s lineage isn’t genuine and in addition gloat over Herakles’ earlier sacking of Troy.

The way Sarpedon handles this is textbook, rather than get into a slanging match he simply confirms and agrees with Tlepolemus. However, he almost schools his opponent in why Herakles sacked Troy (the refusal of the king to honour a promise). As ever Sarpedon is quick to enforce the heroic code, it does not matter who, but why something is done. It is a far more articulate and informed response.

Sarpedon then starts to ice the cake. With some dark irony he promises a dark death to Tlepolemus (the irony being that he had just spoke of the importance of keeping promises) and finishes it off with a pseudo dedication to Hades and a reminder of the heroic code (that he fights for glory, which is both his and Hades).

He then dispatches Tlepolemus, but receives an injury in the process. I’ve often wondered why, perhaps it is to develop Sarpedon further, or perhaps to remind us of that other injured hero who was linked to the theme of leadership – Menelaus (they also share a lion simile in their aristeia). As we’ll see the concept of leadership is never far away from Sarpedon either in word or deed. 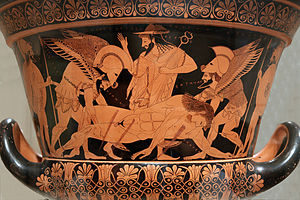 the death of Sarpedon as depicted on the Euphronios Krater

Sarpedon may come across as a bit subversive when he speaks to Hector, but make no mistake, he’s the poster boy of the heroic code. Speaking to Glaucus (Bk XII) he gives us an essential tick box of why leaders should fight and what their responsibilities are. Really we shouldn’t be surprised, he indicated as much in his dialogue with Tlepolemus.

Of course we do have that opening salvo to Hector to contrast this with – perhaps it was there purely to motivate Hector? In some sense it isn’t a contradicting opinion with the one he now chimes with. The dialogue with Glaucus is all about leadership and his words to Hector may reveal that Sarpedon has an understanding of what it is to fight for someone and be the leader, in short how the common man feels about war.

The overarching motif here is of leadership, Sarpedon seems to understand it very well from his lines to his colleagues through to how he himself is used to handle the theme. Zeus molls over what fate to choose for his son and in doing so the Olympians themselves are brought into sharp focus. Does Zeus abandon Sarpedon to his fate or intervene? His decision brings about a discussion with the gods and through this we see the motif of ‘leadership’ agains examined, albeit it at the highest level.

Even after making his choice Zeus continues to weigh up how the battle will unfold and it is as he looks over his son’s body that he thinks things through. Even in death it seems that Sarpedon catalyses reaction and thought amongst the most powerful leader in the poem. As we’ll see in his death, he even extends his leadership qualities to his dying words.

If you didn’t know by now you’ll have guessed that Sarpedon dies, killed by Patroclus. But what can we read from this? Aesthetically it’s a beautiful death, Homer enjoys the gory deaths but here we have quite a romanticised one. As he lies dying Sarpedon is careful to relay expectations to Glaucus which are all in line with the heroic code and in particular the common fight over the fallen colleague (Bk XVI). Sarpedon himself had contested over an injured Hector finally he ends his speech with directions to the troops.

So Sarpedon’s corpse is contested over and stripped by the Greeks, perhaps to avoid it being spoilt Zeus has it whisked away to his homeland. The image of this on a vase is striking. But it doesn’t quite end there. The intensity of the fight over his corpse (in which four named fighters are slain) is repeated in the funeral games of Patroclus which sees Sarpedon’s armour being the prize for a quite vicious fight (Bk XXIII).

We come full circle, Sarpedon has regulated the heroic code both in action, in words and even in death. He has also allowed Homer to examine leadership at both mortal and immortal levels.