For the ancient Greeks the beard was a cornerstone of masculinity. To be in possession of a full beard marked you out as a fully adult male and in the societies of the Classical period (and earlier) this was not to be taken lightly. Presuming that you were a citizen male the growing of facial hair had far more political and social traction than it does now. In Aristophanes’ Poet and the Women Mnesilochus is shaved to enable him to be disguised as a woman, upon viewing his newly shaved face in a mirror he exclaims:

Readers of Aristophanes will be all too familiar with his attacks on real life figures, Cleisthenes was one such character, a politician who was considered overly effeminate. He appears later in the play when informing the women that they have a male impostor in their midst. There is little subtlety at play here, Cleisthenes introduces himself to the women and immediately states his love of them or rather love of how they look, he even mentions his hairless cheeks.

The joke alludes to a wider comment about a prevailing attitude in Athens, and indeed Greece, in short beards maketh the man. This was not a new attitude, Homer mentions uses the beard, or lack of, as a demarcation clearly when recounting the fate of Ephialtes and Otus. These brothers were quite a handful and may have even threatened Olympus had they reached manhood, yet Apollo killed them both ‘before their beards had begun to grow’ (Od.XI.320).

At this point it’s worth introducing the argument, that both males and females in antiquity may have entered puberty a little later than by modern standards. As Davidson in Greeks and Greek Love posits, it’s possible that Greek youths weren’t starting to grow anything till around 18.5 years (pgs 80-81).

Assuming you were a young man sporting a new beard how might you keep it? Unsurprisingly the ability to grow a beard didn’t simply mean you left it to its own devices, take the Spartans for example. One popular notion is that they would periodically trim their moustaches, and this is cited in Plutarch’s Cleomones (9). As Stefanos Skarmintzos argues, this may not be the case and instead Spartans were instructed to keep their moustaches nice and trim.

In the context of hirsute husbandry it would not surprise you to know that beards and their upkeep was considered a necessity elsewhere. At Athens, more specifically in the Piraeus, the famous port, some barbershop gossip caused a near riot and mass public confusion.

The year was 413 BCE, some years earlier Athens had taken the time out from a truce with Sparta to send an expedition to Sicily and it had gone spectacularly wrong. The beaten Athenian force had been chased down, its leaders executed and the rest kept imprisoned in open quarries where most soon died of hunger and thirst.

Yet in Athens none of this was known. Both time and a lack of survivors to tell the tale meant the city was in the dark about it all. That was until a stranger casually mentioned it in the barbers whilst either waiting for a haircut or getting a trim. In Plutarch’s Nicias (30) the barber then runs to Athens to announce the disaster, concerned over the public reaction the Archons interrogate the barber (including torturing him). It wasn’t until the survivors started to arrive that the realisation sank in.

Life would have been easier for the barber, or at least a life minus one incident of torture, had he been the priestess of Athene at Pedasus. According to Herodotus (1.175), warnings of disaster were signalled by the priestess growing a beard and this occurred more than once.

The idea of men chatting or simply gossiping at the barbers isn’t restricted to this once instance. Plutarch (On Talkativeness) tells us how Sulla was able to sack Athens after his spies heard old men chattering in the barbers about a section of wall being left unguarded. But it wasn’t always customers with the loose lips, Plutarch’s other tale involves a barber, this time in the Sicilian city of Syracuse.

At the time it was ruled by Dionysus, a particularly pernicious tyrant. When the topic of his despotism came up the barber quipped that he was more powerful as he held a razor to Dionysus’ throat every few days. Dionysus found out and had the barber crucified. The outcome may have left a mark (or several) on the poor barber but according to Cicero (Offics.II.vii.25) it also left one on Dionysus as the tyrant, fearful of assassination, resorted to singeing his beard with charcoal rather than risk having someone shave him again.

As with any fashion someone will come along who turns the convention on its head. In the case of beards it was Alexander the Great who seems to have preferred the smooth look and according to Plutarch he outsourced it to his soldiery, instructing them to shave. When questioned why this was Alexander pointed out that it was something which the enemy might grab in combat (Regnum.27). Whether this has any real basis is unknown, though Plutarch makes a similar point in his Life of Theseus where he writes that Alexander was influenced by the Abantes, a Greek tribe who lived on Euboea and cut their hair short to avoid it being grabbed in combat (Theseus.5).

A few decades after Alexander’s death (at the beginning of the 3rd century BCE) a certain Publius Ticinius Maenas wandered north from Sicily to Rome with barbers in tow. The fashion for shaving soon took off.

Romans always wanted to distinguish themselves from the rabble, the Greeks and Gauls were proud of their flowing facial locks and, as ever, the Romans turned this concept on his head. Facial hair would now denote barbarism. In the Second Punic War (218-201BCE) Rome recalled Marcus Livius, a disgraced former senator. Marcus’ arrival is reported thus:

“but his squalid garments, his neglected hair and beard, his whole appearance showed pretty clearly that he had not forgotten the humiliation”. (Livy.27.34)

Needless to say he was whisked away for an immediate makeover. But the point is clear, beards did not a Roman make, a Greek and Gaul perhaps, but not a Roman. They did, however, share one idea with the Greeks, that the time at which you had you first beard marked a transition of supreme importance. As we’ve seen the Greeks saw it as a way of confirming manhood.

The Romans had their own celebration denoting manhood (the toga virilis) but being Romans they were soon able to make the first shave a celebration and named it the deposito barbae. In this rite of passage the shavings would be dedicated to a god. In true form Nero went full on Liberace and had his stored in a golden box studded with pearls and dedicated it in the Capitol (Suet.Nero.12).

Not all emperors celebrated this in their late teens. Augustus had to wait till he was 23 before he had his deposito barbae (Dio.48.34).

Augustus may have been a late bloomer but by the Imperial period barbers were a common occurrence in Imperial Rome, not only working in their barbershops but also in the baths. A barber might offer plucking as an alternative to shaving, particularly in more sensitive areas such as the armpit. Needless to say this would cause the odd squeal and for those living near the baths this was a nuisance. One such complainant was Seneca who, in a most un-stoical manner, wrote

“imagine the skinny armpit-hair plucker whose cries are shrill so as to draw people’s attention and never stop except when he’s doing his job and making someone else shriek for him” (Letters. 56.1-2).

Plucking was an option and had been for some time, according to Suetonius Julius Caesar was carefully plucked and trimmed daily (Caesar.45). Unable to resist temptation Suetonius suggested that the plucking didn’t end just there.

It follows that if the rich and famous were undertaking this sort of treatment then those offering it could make a pretty penny. Juvenal certainly thought so and added it to his long list of pet peeves when mentioning how an unnamed barber had risen to a fortune and near nobility (Satire I.23). The role of a barber was a profession which could still be used as an insult to remind anyone looking to get above their station. Martial is keen to remind Cinnamus that he was merely a barber not that long ago (Epi.7.64, 7.83). More interesting though is Martial’s comment regarding an unnamed female barber (2.17). If the role was considered a low profession then women would presumably have been able to practice it.

As well as Juvenal having his beard ‘rasped at’ he also writes that it was trimmed (Sat.III.186). Could this mean that a look between full beard and shaven was in vogue? I mention this purely because much of the exclusive look in Roman times (as it as seemingly ever been) follows a rule whereby the more expensive it is to maintain the more fashionable it becomes.

With a babble of barbers (yes that is apparently the collective noun) in Rome even those of lower social status could afford to keep their cheeks smooth. Yet maintaining a short beard, something akin to the stubble look of today may have become a fad simply because it would require daily maintenance. It’s purely speculation because by the end of the first century CE. In fact 17 years into the second century CE something big happened to facial hair. His name was Hadrian.

In 117 CE Hadrian became Emperor and with him a real sense of beard came back into fashion. It is rumoured that he grew his beard to hide a skin condition, the reality is we simply don’t know. Hadrian is considered by many to have been a philhellene, and anyone who was truly such a fan of Greek culture cannot have had much of a resistance to growing one. 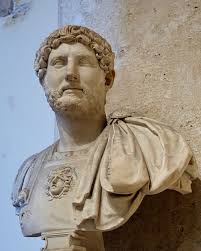 Hadrian, a beard for the ages

With Hadrian we come to the end, well, sort of and in a rare instance I’m fortunate to be able to end on a joke (attributed to Philogelos).

“A scholar, a bald man and a barber were travelling together. When they stopped for a night in a lonely spot, they agreed to keep watch over their belongings for four hours each. The barber took the first watch and, to amuse himself, he shaved the scholar’s head as he slept. When his watch was over; he woke the scholar. The scholar scratched his head sleepily, and finding that he was hairless, said, “That barber is such a fool! He woke the bald man instead of me”.